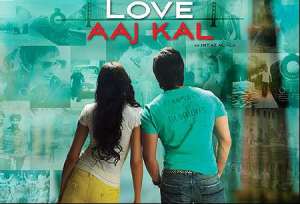 If you are tired of the day work, and want some pleasant experience which removes the feeling of tiresome, go watch “Love Aaj Kal”. It is just like feeling cool breeze which comes your way when you stand on top of a hill station and which gives a gratifying feeling. Go watch and return with a smile on your face.

The two dialogues in the movie when a girl (not Deepika) asks Saif, that does he really love him, Saif says ‘LOVE’, Actually he didn’t sort it out till now what is love. So the girl says “Call me when you sort it out till then good bye”. This is all about Love Aaj Kal.

Jai (Saif) is happy go life kinds of a person living in London who always wanna does and take things practically. He never understands the meaning of Love (even me too even after watching this movieJ), but understands that what all he really did and had the feeling is really Love. Well, Deepika is the person with whom he shares everything in his life and never understands he loves her. They break up in the starting of the movie due to their personal reasons and want to continue communicating with each other through phone, mails etc(Deepika would be leaving for India after break up). Saif have dreams to get into the largest construction firm in San Francisco. He treats this dream to be important rather than Deepika. While In India Rahul Khanna and Deepika make a couple.. Important thing to mention here is the role of Rishi Kapoor who relates Saif’s decisions to his life and he tells his story whenever Saif asks him. The movie ends with an interesting note, can say its Imtiaz Ali’s style of making a movie.

Imtiaz Ali has proved to be again a potential movie maker with Love Aaj Kal. The past of Rishi Kapoor was well handled by the director and surprisingly used Saif in the flashback of Rishi Kapoor’s Love story. And the girl (Rishi Kapoor’s lover) is cute with genuine charm and made not only Rishi Kapoor but also much of the audience to praise her beauty. Deepika really did well, better than her previous movies and was very interesting to see her presenting her acting skills. The chemistry between Saif and Deepika was drafted with modesty. Thanks to the director to portray that with an aura of congeniality. The dialogues may to some extent didn’t work out work for the movie but were meaningful. Especially with no action sequences, lewd scenes, chaos consequences, havoc situations Love Aaj Kal is O.K; Songs are good and same concept of last song after the end of the movie.

Bottom Line: – Give it a try, definetly not a bad movie but surely a soothing movie which will not disappoint.