Nothing But the Truth – Truth is the most Dangerous Secret 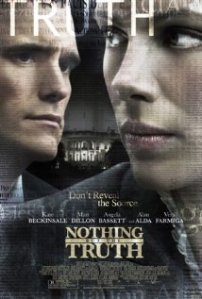 I have created a likeness for the movies which are based on true events or true stories. Many films have made me a greatest admirer of such movies. And i must mention one of them is ” Nothing But the Truth”

It’s inspired by true events and is a explosive story about a Washington D.C reporter who faces a possible jail sentence for outing a CIA operative Agent and refusing to reveal her source.

I am not concerned about what the Truth is, but i am really impressed with the way the movie was made. This is not a kind of documentary, but it’s a gripping, dynamic drama exactly because of its grandstanding, given valiant support by unflagging talents( the cast in the movie). The lead character in the movie (the journalist) was powerful and brilliantly acted by Kate Beckinsale.

A man leaves his children and goes to a war, they erect a monument on him, A man leaves his family and goes to jail to protect his principle and they name a holiday on him, but if the same is done by a woman, then the woman is a monster. This is all what the movie is about. It is a celebration of the necessity of journalism.

This movie is, more than anything else, about her journey in coming to grips with the fact that personal life is at stake , and that the best she can hope for from here is the name of the Source is not revealed but she can go to jail for at least 2 yrs. Thats where the movie reaches the high pitch and the director has successfully shown the emotions and with the screenplay the audience can understand whats really in the minds of the characters portrayed in the film.

Nothing more to mention and just want to end it saying “its a spellbinding thriller , Do not dare to miss it”