Is Nenokkadine really that Bad?

My answer is a big “No”. Read my take to know why this is the Best movie in telugu in recent times!

Nenokkadine is a fiercely twisted, complex film built on a solid foundation of character-driven emotion. Those who think of Sukumar only as that guy who makes love stories will undoubtedly be disappointed,but if you’re interested in more than seeing how a psychological thriller is made in Telugu, Nenokkadine delivers. Mahesh’s performance is a critical part of that whole movie and like so much in the movie, it will payoff when the credits roll and Sukumar closes the book on his story. In doing so he leaves us with all the answers we need. My best scene in the movie is ” Here comes my golden rice”, the dialogue and the expression of Mahesh babu was over the top.

Ultimately Nenokkadine is an interesting departure for Sukumar and Mahesh, can understand as the end result isn’t perfect for the fact that the film was crafted by a director who made love stories, acted by a superstar who followed a different genre altogether, that too, in an industry where people like to watch more of a circus than a movie. Personally, I’m one of those movie lovers who appreciates a film that makes me want to watch it again as soon as the end credits have rolled. The climax is the best thing of the movie, finding about his parents was an emotional, intriguing, fantastic sequence that left me astounded while realizing that I have seen the best Telugu movie in recent times.

What might have went wrong with “1” of not being said as a hit in all classes:

As a feedback, the film got the reviews that it was too confusing. This occurred because the director tried to over convince people that the actor hallucinates things (for example, the parking fight in London) and many scenes in the first half of the movie. Also, too many scenes showing the female lead fooling the protagonist. Once or twice should have been good but it went on and bored the audience. We can understand that the director was trying to give more screen presence for the actress but it certainly, should not be at the cost of making the movie boring.

Well, no one likes a speed bump when going on a highway, just like that for no reason. Well, this is what happened with this movie. When the story is about to take off, it attains a break to force fit a song. And another important aspect , the songs were not so impressive, at least a certain section who disliked the movie would have loved the movie for songs which unfortunately was not possible.

Before taking on the length of the movie, let’s talk about the line of the story, the theme. I felt the director deviated from the plot to introduce the female lead and show the unnecessary chemistry. The chemistry between the lead pair in first half was given so much importance which would not compliment the intricate story line of Nenokkadine. It was totally off track and in turn increased the film length. Here, I like SS Rajamouli’s take on chemistry, (take Vikramarkudu or Simhadri) he never gives a vital place in the story when unnnecessary, just a song in which hero and heroine would fall in love with each other. 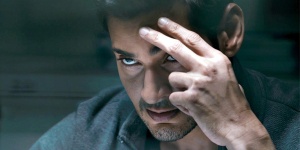 Despite above discussed potential drawbacks, movie is a must watch because the movie has got strengths in the form of Performances, Cinematography , haunting Background score from DSP which made every scene interesting and the best scenes like the Interval sequence and the climax sequence finding his parents and the important thing “Sukumar’s directorial and screenwriting skills”. Well theres so much more to add to the strengths which you can see in the movie and realize.

Mahesh just gets better with each film. There are layers to Mahesh’s performance that should be more evident upon subsequent viewings, but he is one of the few actors who can bring depth, complexity and delicacy to obsessed, often unhinged character like in this movie. Sukumar’s craftsmanship in this movie may be both the best and ironically the worst thing about Nenokkadine, but not to be disputed he made it a far more intriguing than it otherwise could have been. A “1” from Sukumar is still better than most other filmmakers’ best efforts on a similar theme.

PS: Like slow poison, ~1~ will slowly capture your senses to realize how awesome the movie was! Believe me!

1 Response to Is Nenokkadine really that Bad?