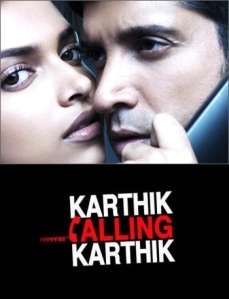 After the smashing hit ROCK ON!!! And then a lull Luck by chance, Farhan Akthar is back with a hatke movie – Karthik Calling Karthik. It’s definitely a thriller, which promises to keep the audiences on the edge of their seats. The movie truckles at a dawdling pace and when the suspense is unraveled, hits you not as a bolt but as a gentle whack. Farhan Akhtar is turning out to be a brilliant actor. And of course Deepika Padukone is simply awesome in the Movie.

Coming to the story, the protagonist Karthik (Farhan) is a shy, gutless guy improbably short of confidence seems destined to mundane, monotonous life with an unfulfilled desire to fall in eyes of Shonali (Deepika) who works at the same place where he works. Shonali is a fashionable uptown girl who lives life elegantly dating and partying. She just takes life as it comes and will be dating a colleague in her office. She never noticed Karthik in her office as Karthik is the proverbial loser. She notices him when Karthik gets fired by his boss. He will be having more than 1K unsent mails to Shonali to express his love towards her. After he gets fired he spends his time alone in his home for hours, then at a point of time he gets a call on his Phone( Land line, Karthik never uses a mobile as he thinks that the radiations are danger for his health). The other side will be Karthik talking to Karthik, Karthik eventually as the loser Karthik to take the advice of the admonishing, super confident Karthik and who promises to change his life for better. What happened after wards? Did he follow his tips? Did he get any job? Did he get the girl he wanted? BTW who is the other Karthik? The movie tells the rest of the things.

Performances were awesome in this movie, especially Akhtar putting in an absolutely terrific performance as his character undergoes a transformation from a shy, retiring underdog to a suave winner. He is absolutely stunning. His anguish at being unnoticed, exploited and squashed by all was well shown by the director and the actor has made justice to this character. Deepika – I did not understand Deepika’s character (Shonali)in this movie, she dates many ‘Jerks’ who dump her at later time and still wants to find her prince charming. At a point she says that Karthik is a safe and she can never imagine him misbehaving with her like others do, but she says she can teach him as “How to Misbehave”.  In a scene Shonali bawls out at Karthik saying that he called her and abused her, So is this what Karthik thinks of her even when he loves her? This is not important but just a logical point where you need to see the movie to understand this.

The director had made his best to narrate his script but the movie is unnecessarily musing and long-winded for its genre. But one thing the movie keeps you much intrigued with what will happen next. The director had made the romantic interactions as sluggish and uninspired, but he is successful in showing the anxiety, simplicity and frail features of his protagonist. The music by SEL(Shankar Ehsaan Loy) is splendid. The photography has gained its marks.

Bottom Line:  It is a good movie that deserves one time viewing.  Watch it!!!