A Salute to the MARTYRS

How many of us remembered the day today? At least for even one minute did we think of that day? July 27th 1999, exactly 10 years before today, India has celebrated its win over the rival Pakistan – The day has since been marked as Kargil Vijay Diwas (Kargil Victory Day) in India. By the end of this war, India had resumed control of all territory south and east of the Line of Control, as was established in July 1972 as per the Shimla Accord. It’s the victory in Kargil war. Commander Prakash Malik led India to a glorious victory. Let us pay tribute to 527 soldiers killed and salute them.

Yes, due to many circumstances we may not recognize the importance of the day. But are we only concerned about our daily schedules and our daily appointments and our daily meetings? Don’t we have time – just a minute of Silence for those who have sacrificed their life? Yes we are and we should be – we are not as irresponsible as many of our political leaders who always fight for their positions and prestige (Our CM and Opposition leader fought against each other today for bringing referendum who are least bothered about their responsibilities).

Thanks for the Media – Print media as at least they had published some articles on the importance of this day and also thanks to the Responsible electronic media (who at least are not bothered about Obama’s costly dog or Aamir khan ka kutta ka naam or at least don’t bother about who Deepika is dating – are they of any use?) to make documentaries and present them to the viewers.

We should remember some epochal situations for which we have to be proud enough. We fight to celebrate Valentine’s Day but do we just think Kargil Vijay Diwas? (Supporters of “Pink cheddi” are you listening?).

Is our government bothered about the proud parents of those martyrs? I have read in a News Paper (a responsible newspaper – referring like this is very important) regarding the parents of one of the soldier from a village who just live in hut who live with daily wages for their food. If not these people whom should the Government take care of, is it that tough for the Government to provide good shelter for them? Another proud father himself was an Air force high grade officer (Father of Major Padmapani Acharya – who died on 28 June 1999 – check this link link  http://www.bharatrakshak.com/HEROISM/Acharya.html– Don’t miss this link at least the last paragraph of the page) his father quoted saying, he is not sad of his Son had died but he is sad because INDIA has lost a brave soldier. How great he is to have given India such a brave soldier. Dear friends is it not our duty to at least know some things which we really have to? There are many such instances in many soldiers lives (present in the link above) just that we have to know and let others know the importance of those people who have sacrificed their life for sake of OUR COUNTRY . 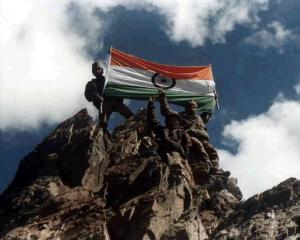 Bottom line:- These are just what i have come to know ,there are many such stories not only in Kargil and as we all know, At many such situations the only hope or the only faith they give us is ” WE ARE THERE”

This entry was posted in Change we Need!!. Bookmark the permalink.