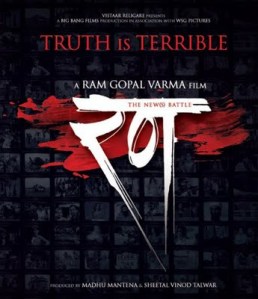 When I watch Television these days I prefer watching the entertaining news channels, yes they are entertaining and I mean that. Where can you get dramatized stories of current problems in our country with a astonishing background music also with overwhelming anchoring or where can you get a fictional stories of some topic or where can we get the hot gossips of the movie stars and especially at mid night the news channels forget what they are meant to be. I am not talking about the whole media but especially the news channels where they take everything for granted. Once Pandit Sri Sri Ravi Shankar (Art of Living, me happened to be his follower) said to an interview to an news paper that “The Primary responsibility of the media is to give facts and show the world and if not secondarily to educate people”. Hahaha is anyone following this, I definitely accept that. I am not saying that what he said should be true and one must follow, but just think.

But RGV in his movie “Rann” has just touched some facts of news “making” trend in the current times. How can be the news made and how can they attract people to increase TRP Ratings and in the “Rann” to increase the TRPs to what extent any certain media channel will cut through and go deep into any issue. The movie starts with showing different TV news channels and how they present different thing and what shit they present. Vijay Harshavardhan Malik (Amitabh Bachan)– owner of INDIA 24×7, is known be the honest news representative and a very famous person. He thinks that he owes something to the public and he wants to give to public. His son Jai Malik (Sudeep) will have an entirely different opinion on news channels and he just considers them to be a business. He wants to bring in change to the news channels. Pandey (Paresh Rawal) is a politician and a opposition leader striving to get the PMs chair at any cost. Rajat Kapoor plays a character of a big industrialist and who happen to be the son in Law of Vijay Malik, and a key player in Pandey’s politics. Another News channel owner Headlines 24 who previously worked for INDIA 24×7 will start a news channel of his own. And he has the C.O.O of INDIA 24×7 working for him getting the confidential information. Purab Shastri (Ritesh Deshmukh) is a journalist and a follower of Vijay Malik and also considered him to be the Role Model . He joins INDIA 24×7 and will express same thoughts and ideas what Vijay has. The concepts of INDIA 24×7 will be lifted by H24 with the help of C.O.O of INDIA 24×7 and Jai Malik gets shocked and will be in a restless moment think of how he can beat the other channel and also he will have 30 crore of debt to market. Now the “Rann” starts for dumping other channels and make their own channel prominent. How this battle goes and who will get benefited from this, what will happen to the lives of people who helped each other? Go watch it , I definitely say its worth watching.

The characters and characterizations in this movie are brilliant; especially Paresh Rawal will steal the show. He has some powerful dialogues where he proves his strength in his words, especially the dialogue “I don’t simply be called as Pandey” (watch the movie to understand the toughness of this dialogue).  This movie is another example why Amitabh Bachan is called a star. He is definitely a master in fact maestro in acting. His eyes have talked in this movie. His body language was extremely amazing. Ritesh Deshmukh was just like what his character wanted him to be. A perfect, journalist looking style. His expressions in this movie are awesome. Gul Panag has made a quite a good screen presence as wife of Ritesh. Rajat kapoor at his best. Person I have to mention here is Sudeep who played the role of Jai Malik. He was perfect fit for the character. His restlessness scenes, his smoking habits in this movie and his body language in this movie add credits to the movie. He was too good at whatever he has done in this movie. Rajpal Yadav for a humorous part, he has been made a typical gossips presenter on the news channels. His act represented the typical reporters and so called creative heads in the present news channels. The last 15 min reveal everything about media

The photography was brilliant in the way it has been done, (the way like Bourne Ultimatum is made). It will be we will be also running with the characters in the film, Came to know that it is called Still Camera which will be tied to the camera man’s waist and shoots the movie. The background score was definitely a huge plus point of the movie. It is with the background score the scenes were looking as what they have to be. Good one. The angles of RGV are amazing and I like that kind of shots but most people didn’t like it, but its definitely a different approach to present a scene. Bib B steals the show with his 13 min dialogue.

Bottom Line:- I don’t know why people did not like the movie, but to see the Naked Ugly truth of the M-World (Media world not Mafia) just go and watch the movie , at least I hope news channel people who have seen this will realize what they are doing with the public of INDIA.